skip to main | skip to sidebar

October 11th, The International Day of The Girl Child


BAOBAB for Women’s Human Rights (BAOBAB) joins the world to commemorate the international day of the girl child. As a global partner with the Women Living Under Muslim Laws (WLUML) global campaign to stop stoning (Change.org), staff of BAOBAB went to neighbouring streets to seek people’s views on cultural/religious belief on the act of stoning in Nigeria.  The ratio of the people interviewed were 7:4 (men to women respectively) and 90% of the people interviewed didn’t have knowledge on the existence of provision for the act of stoning. Below are some of the views

…it’s an unfair act!
…the issue of stoning based on immoral acts is not right! Government should find a way to eradicate such law!
…I think the law is not okay!
…I do not agree with the law on stoning for the sin of immorality but feel there should be a better mechanism to address such!
…it should be removed from the law!
..I believe it is not right. Even if other countries do it, Nigeria should not follow such steps!
…based on my belief I don't think a woman should be stoned to death
…it is a bad act!

BAOBAB also asked friends to send in photos, write-ups etc on “why” they care about stoning. Below are photos and links to Poems submitted. 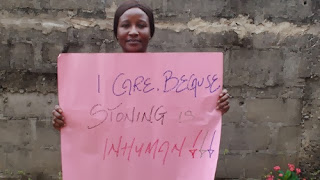 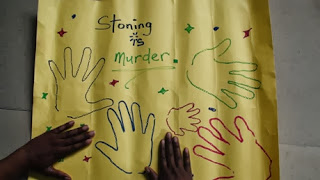 WE ARE HUMAN!
I CARE!

THE MAN IN THE MIRROR

BAOBAB, kindly urges you to join the campaign against stoning and advocate to the UN to take action on abolishing stoning in law, by clicking on this link United Nations Secretary General & the OHCHR: End Stoning Now

Thank you.
Posted by BAOBAB for Women's Human Rights at 1:14 PM

Tell us your opinion

Our Vision & Our Voices